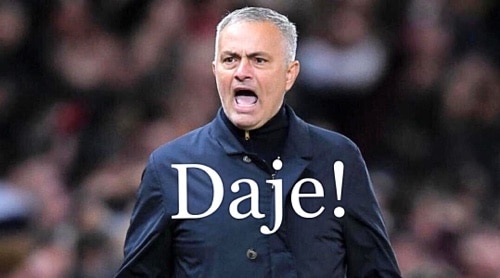 AS Roma’s recent hiring of Jose Mourinho as coach has sparked more than one question in the English-speaking world, where even Sky Sports in the UK wondered about the meaning of a tweet from the coach announcing “Daje!”

There is no single meaning for this Roman dialect word (it’s not Italian).

It comes from the verb “dare” (to give), but like many words, it needs to be contextualized. Indeed, the very context in which it is encountered can determine a difference in meaning, even considerable.

Let’s look at some examples.

First, it can express approval, as when you say:

As a second meaning, it can serve as an invitation to finish something:

“You should be done by now, come on!”

Another meaning is to urge someone to do better:

There are also a several variations:

“Daje e daje” is used when one wants to express a behavior or event that is repeated and has effects:

“By persevering, he managed to win his job back”.

“Aridaje” has a negative connotation and indicates something unwelcome or that annoys if repeated:

“Aridaje, still coming to ask for a pay raise?”

“Daje de” is used when you want to indicate the need to add or use something in the execution of an action:

“We’re going to be late if you go this slow. Push that gas pedal down!”

“The meat is not very tasty. Daje de pepe”

The last meaning, the very one found in Mourinho’s tweet, expresses gratification or satisfaction about a favorable or pleasant event:

“Did you know that yesterday I was hired as AS Roma’s coach?” “Oh yeah!”

One final remark about pronunciation. Daje is pronounced with the “j” sounding as a “y”.

Hear it pronounced by a native Roman speaker.

This site uses Akismet to reduce spam. Learn how your comment data is processed.

The latest edition of the The Interpreting & Translation Herald is out! interpreterpaul.com/… #translation #xl8

You have Successfully Subscribed!